The road trip continues to go very well. This past week has been great.

Upon returning from Bighorn National Forest, I departed with Caleb and Nathan in Buffalo and headed for western Wyoming and Montana.

First, I made a pitstop at one of Wyoming’s prehistorical treasures: Red Gulch Dinosaur Tracksite. Thanks to Nathan’s connection to the Bureau of Land Management, he informed me of this seldom-visited wonder. After driving down a long, unmarked dirt road, Yossi and I made it to the site. It was a scorching hot day, and we had the entire stretch of land to ourselves. 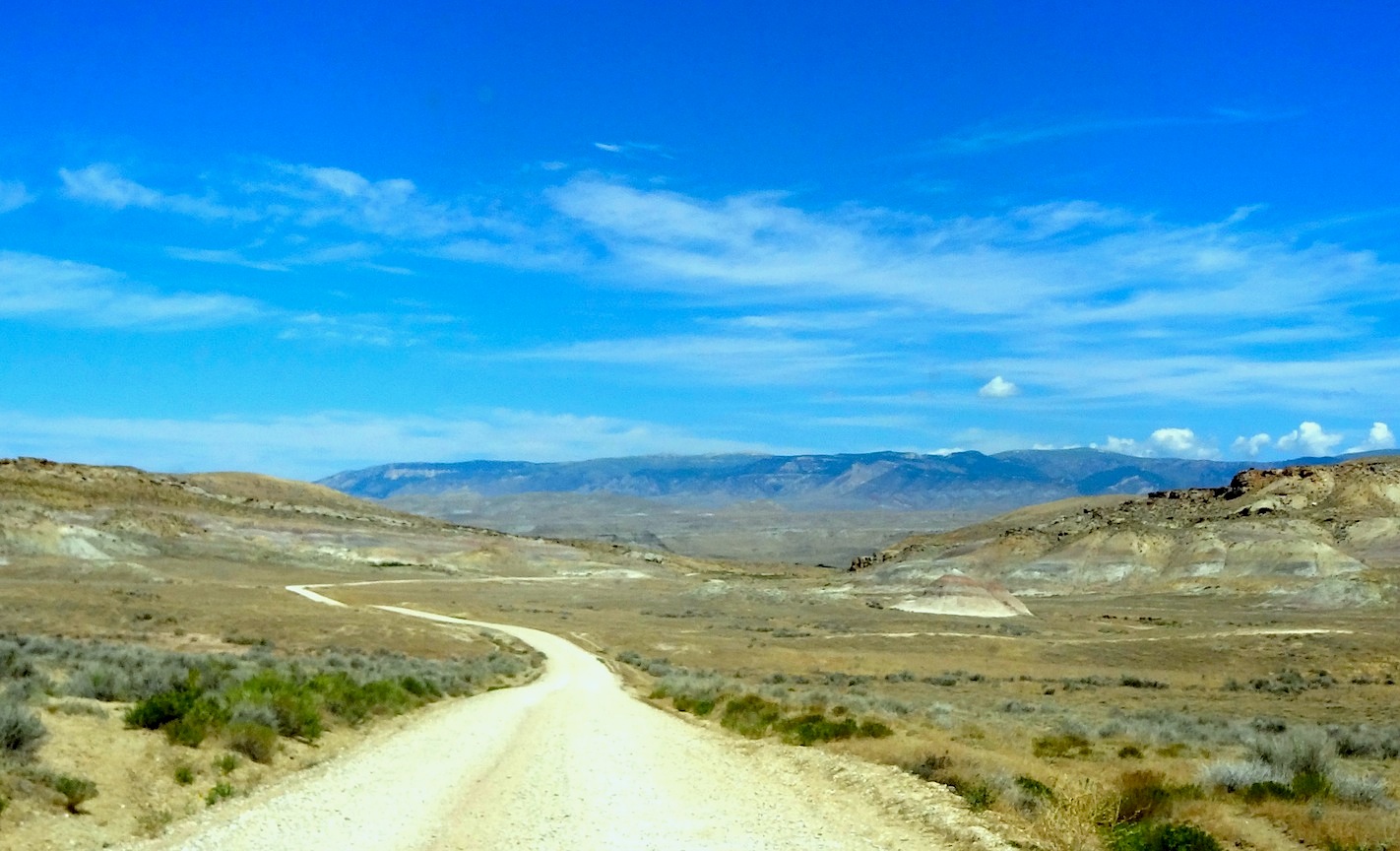 Red Gulch Dinosaur Tracksite is a section of limestone dating back 167 million years ago that contains the preserved footprints of dinosaurs. Seriously, dinosaur footprints.

For two hours, I geeked out and relived my childhood paleontology fantasy days. Yossi and I retraced the same steps dinosaurs took hundreds of millions of years ago. 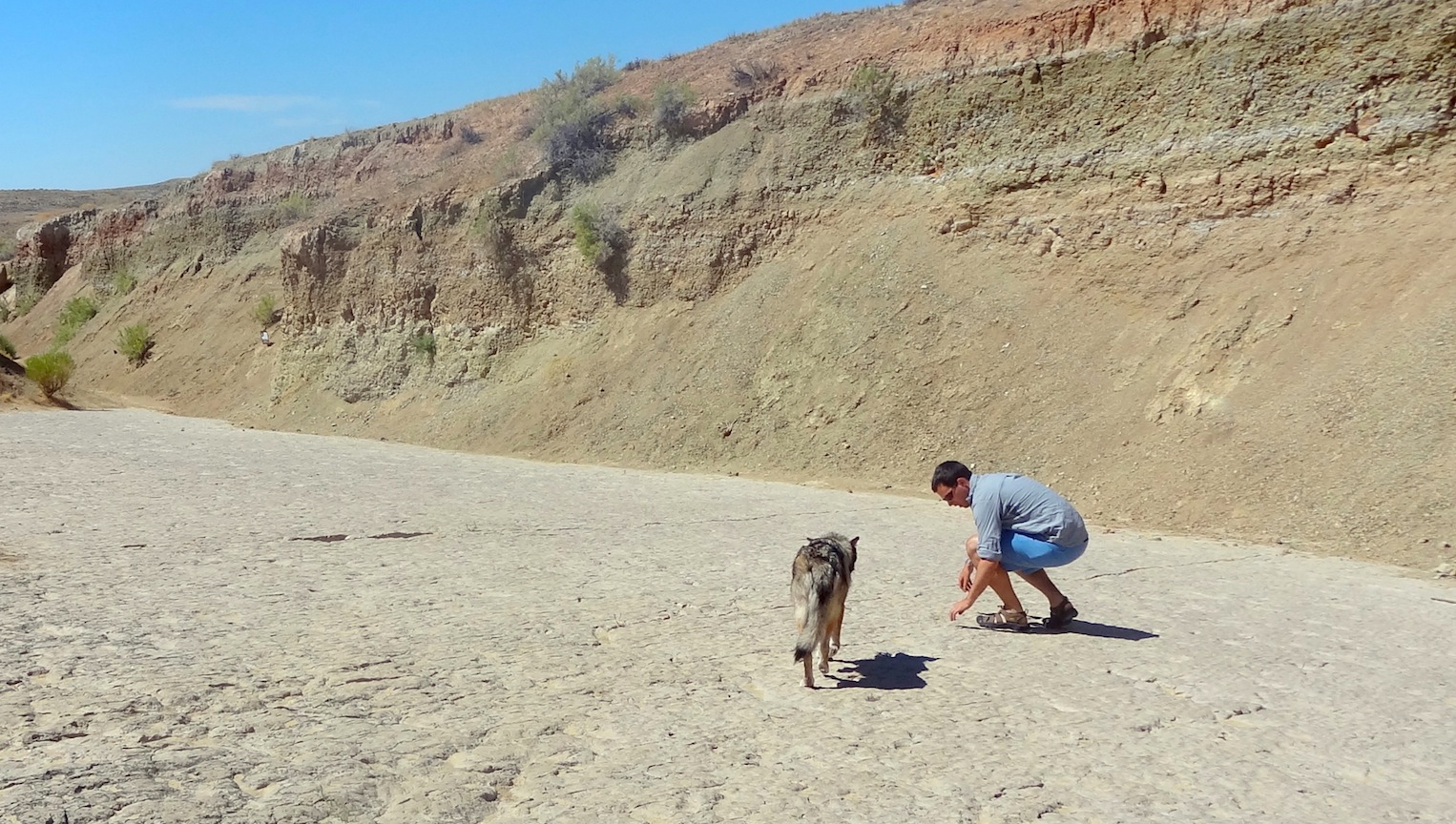 Yossi and I inspect the “dinosaur ballroom”

The site is incredible. It is nicknamed the “dinosaur ballroom” due to the variety of footprints preserved, as if a large group of dinosaurs had a dance party. Paleontologists have graphed the area, and believe the site contains the tracks of over twenty different species of dinosaur. One section is even believed to depict one dinosaur chasing after a smaller dinosaur. Imagine that: 167,000,000 years ago a predatory dinosaur hunted down another dinosaur along a sandy beach. That ocean doesn’t even exist anymore, but the tracks do. Incredible. 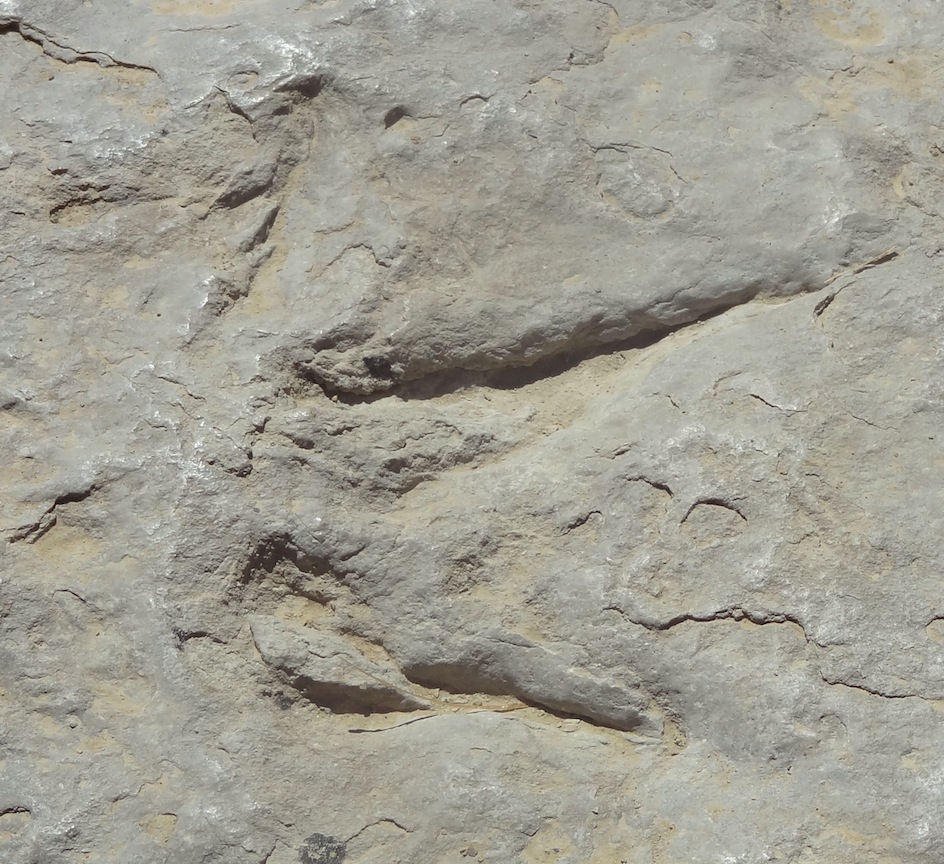 After the mind-bending history lesson at Red Gulch, I hit the road again, heading further west in Wyoming.

I wanted to see more of the backcountry out here, and read Shoshone National Forest was exceptionally beautiful. The forest is located in northwestern Wyoming, right on the Montana border. The forest is in fact exceptional, and the scenery did not disappoint. 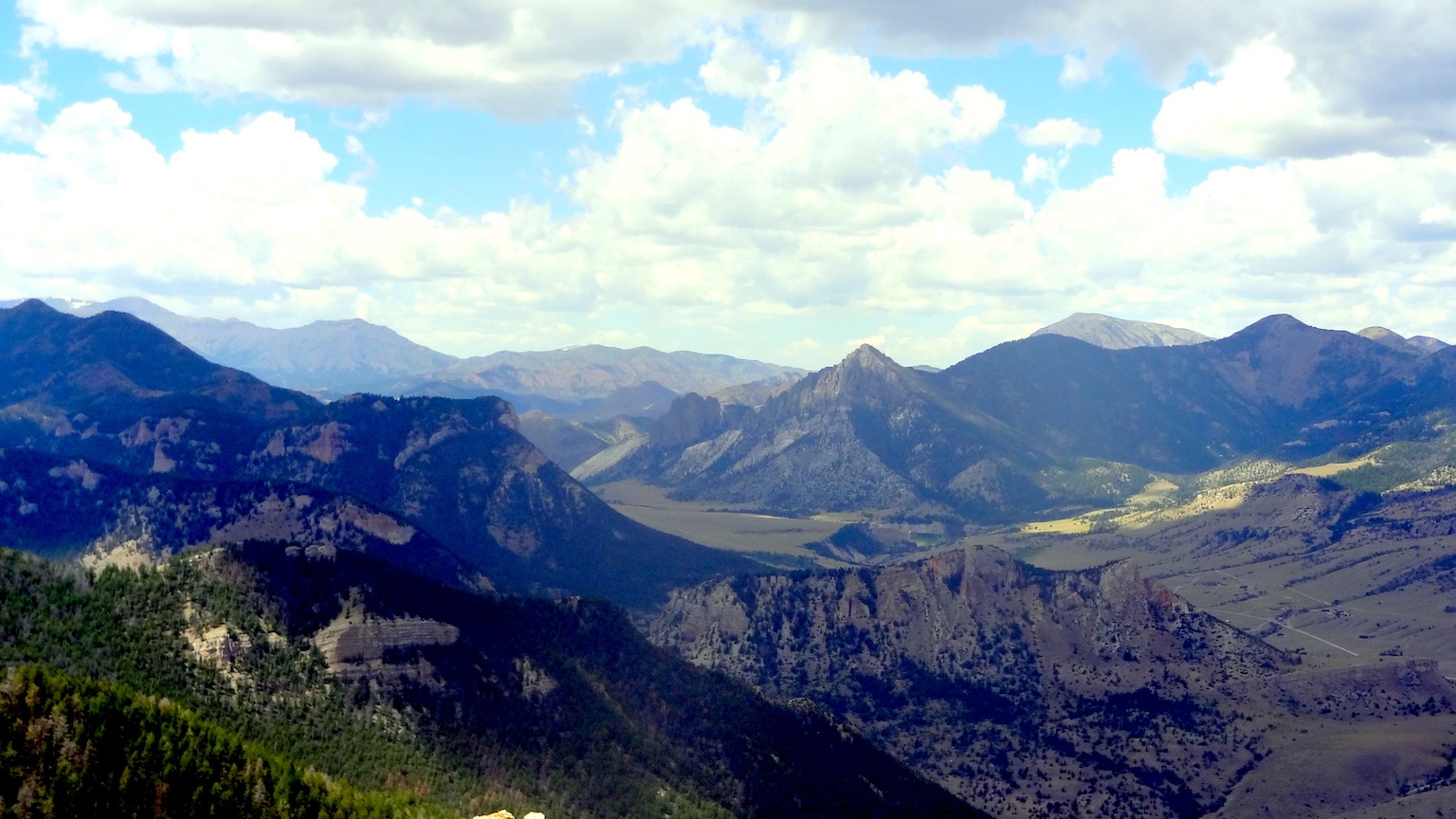 Yossi and I headed out for another backpacking trip, hiking along a section called the Beartooth Trail. Our trek began at Beartooth Lake, venturing up to southern Montana, and eventually looping back into lower Shoshone. The terrain is exquisite. We backpacked over snow-capped mountains, through rolling meadows, and along crystal clear lakes. 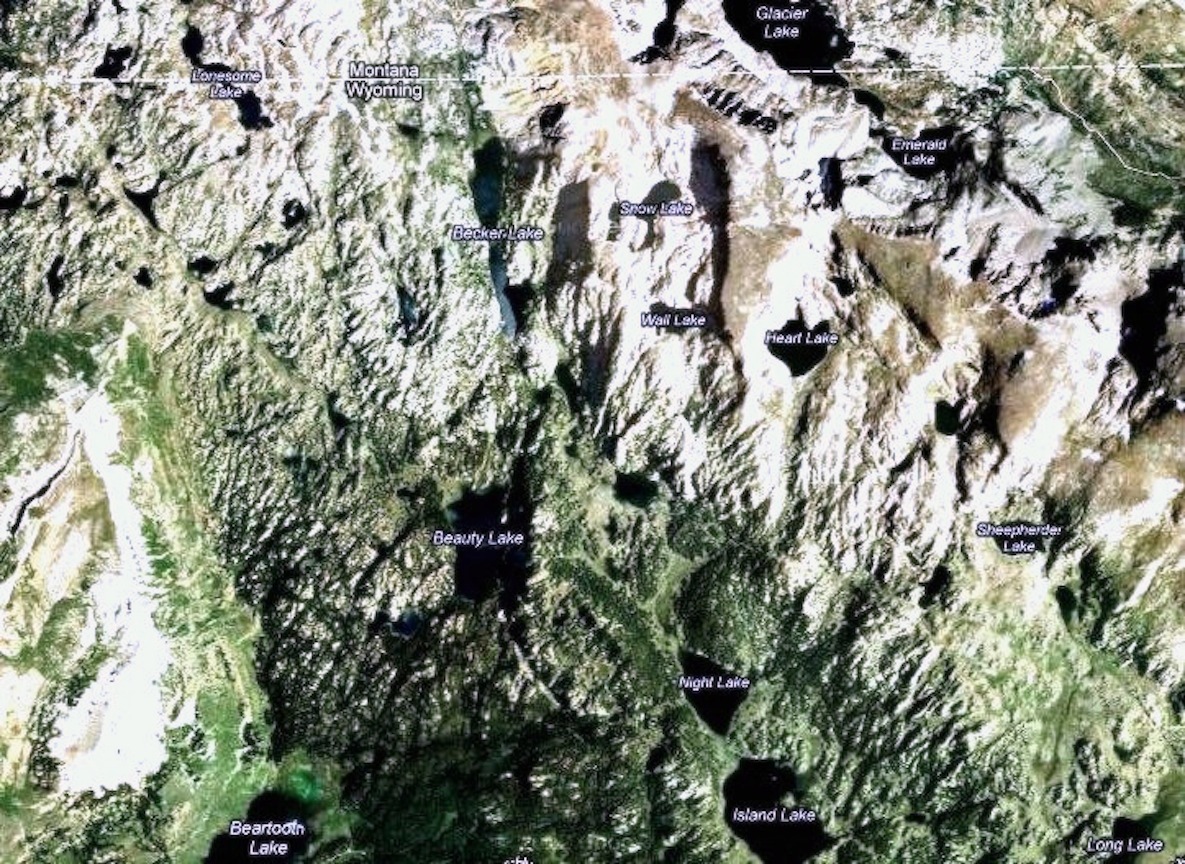 We began at Beartooth Lake, hiked up to sourthern Montana, looped around Glacier Lake, before ending back at the Beartooth Lake Trailhead.
Image: Google Maps

On our first day, Yossi and I came across a rolling meadow covered with blooming wildflowers. 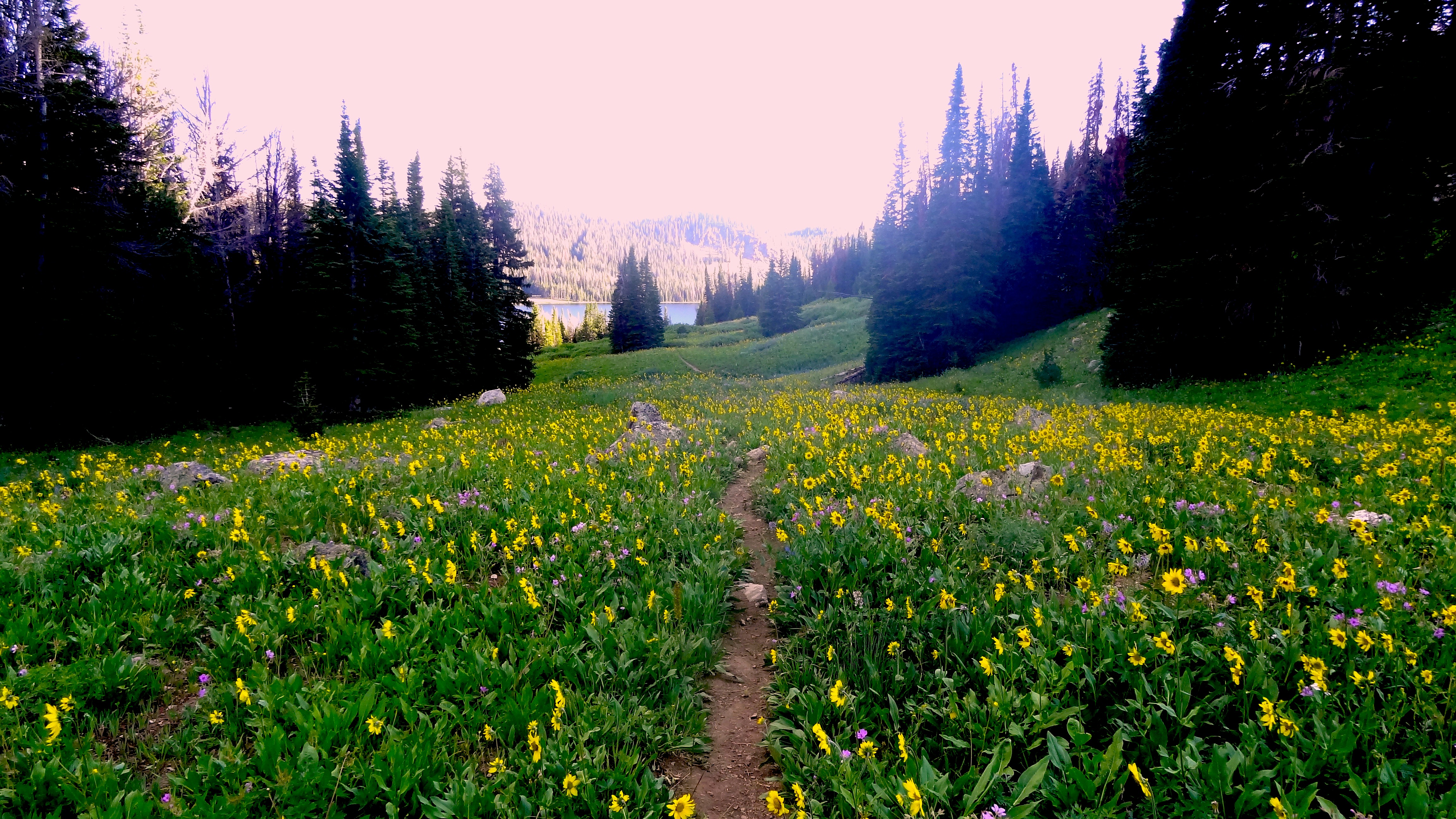 There was at least four different types of wildflowers in bloom. The contrasting yellows, reds, blues, and violets were spectacular. 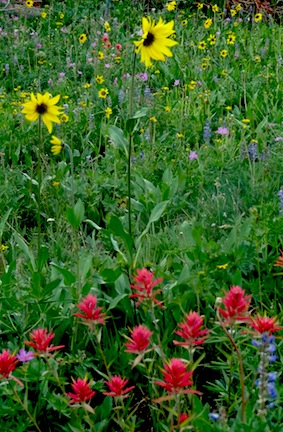 Wildflowers along the trail

As the sun set, the terrain just got more beautiful. The descending light slide through the valley, shimmering through the high grasses and reflecting off the flowers. 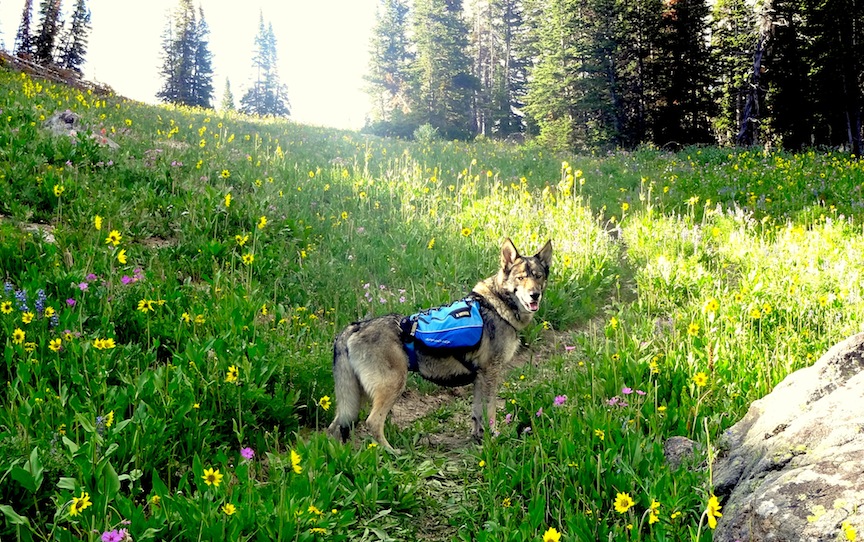 As the trip continued, we slowly meandered along the trail, taking in the scenery with each day.

The last day was simply perfect. I woke up early, caught the sun rising over the mountains, drank my morning coffee, and packed out after breakfast. After hiking up a steep ascent, we hit a placid blue lake.

Overlooking the lakes along the Beartooth Trail

After taking in the scenery, some very erratic and confusing minutes followed. I was so overwhelmed by the view, I didn’t notice the large brown animal swimming in the lake below (notice the ripples in the water above? That’s the animal’s wake). As Yossi and I hiked down the hill, Yossi suddenly perked up and sprinted towards the water. It was at that time that I detected the big brown head coasting towards us.

Now, in the sake of comedy, I really wish someone had filmed my resulting actions. In the moments that followed, I floundered down the hill after Yossi, yelling for him, while also trying not to drop my camera equipment  At first glance, I thought the animal was a deer, but as I got closer I realized the animal was much larger. A chill suddenly flashed through my spine as I remembered all the grizzly bear tracks we had seen along the trail. The hypothetical videotape would now show me coming to a complete stop, pondering for two seconds, and then promptly flailing in the opposite direction.

Luckily for any fragments of pride I have left, I did turn around and take a second glance with my camera lens. 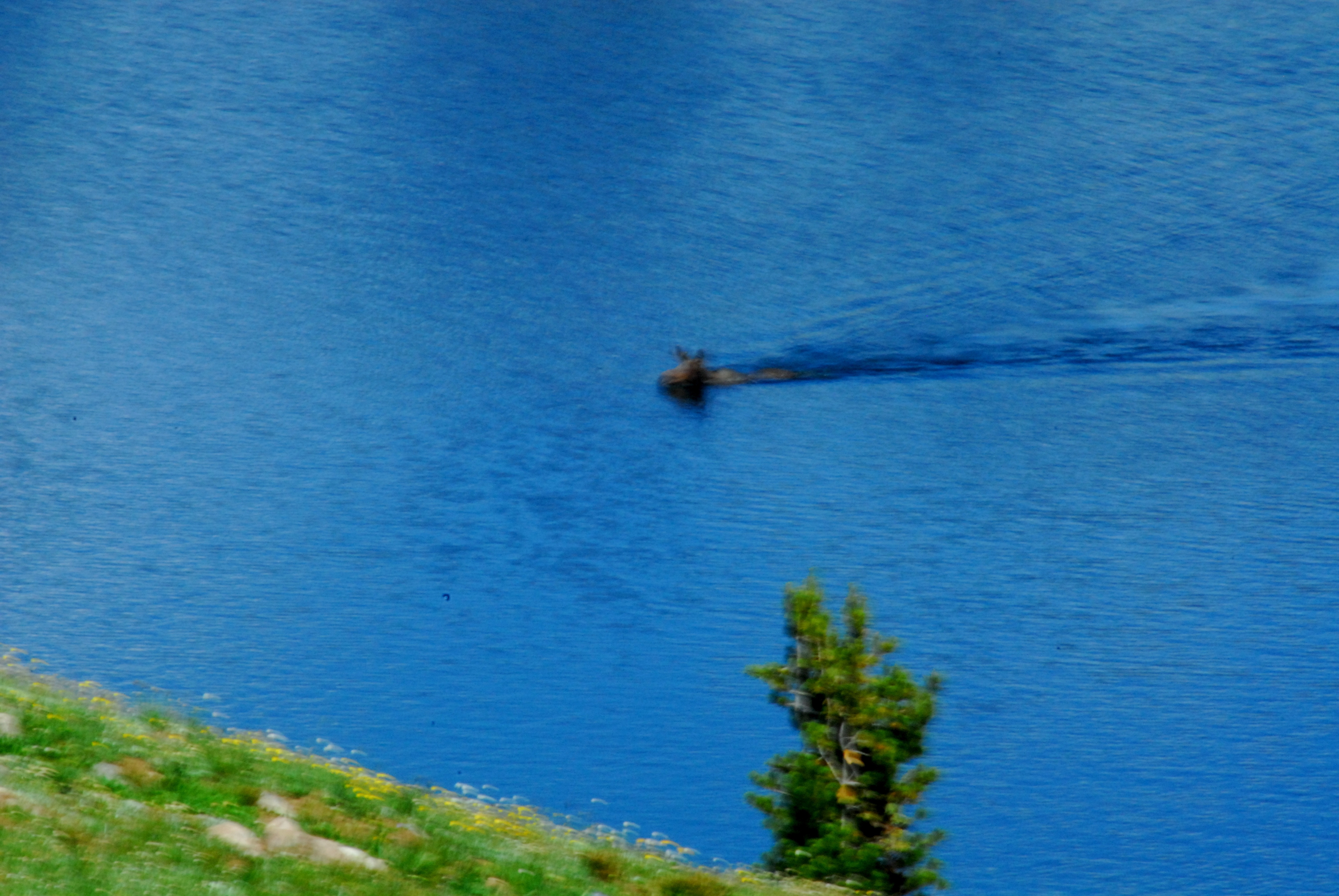 With a second view, I realized it was a moose–not a grizzly bear. Unfortunately, Yossi was still on the chase. By this point all the commotion had really riled up the poor moose and he was sprinting for the hills. It really should have been a magical scene, watching a moose emerge from the blue water and climb up a towering mountain; but, alas, the experience was sort of soiled by my frantic efforts to recall my crazed, lunatic dog. 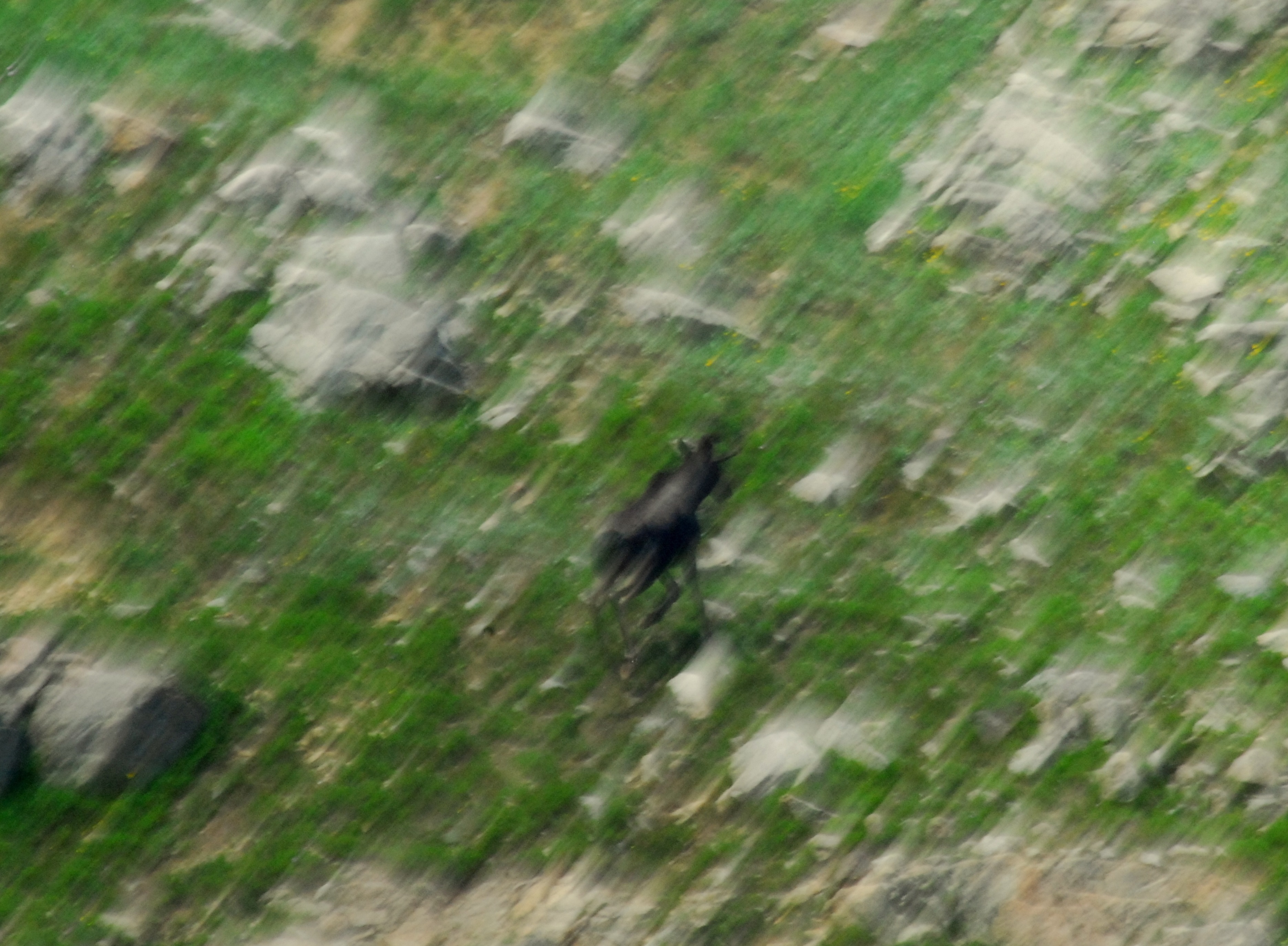 Unfortunately, this is the best picture I took of the moose. Mind you, I was sprinting after a German Shepherd.

Upon my first cast, I caught a fifteen-inch rainbow trout. And it didn’t let up from there. Over the next nine hours, I caught over 200 trout. It was amazing. I just kept fishing the string of lakes and streams along the trail, while targeting deep pools, inlets, and outlets. These trout seemed to be in a feeding frenzy. I couldn’t believe my luck. It should be noted, that I was not catching monster trout–but I was catching large trout. The largest fish I caught that day was a 21-inch cutthroat trout, and the average catch was around 12 to 14 inches. All the trout I caught were healthy, native trout that fought incredibly well. After a lifetime of being frustrated by finicky North Carolina trout, this was heaven. 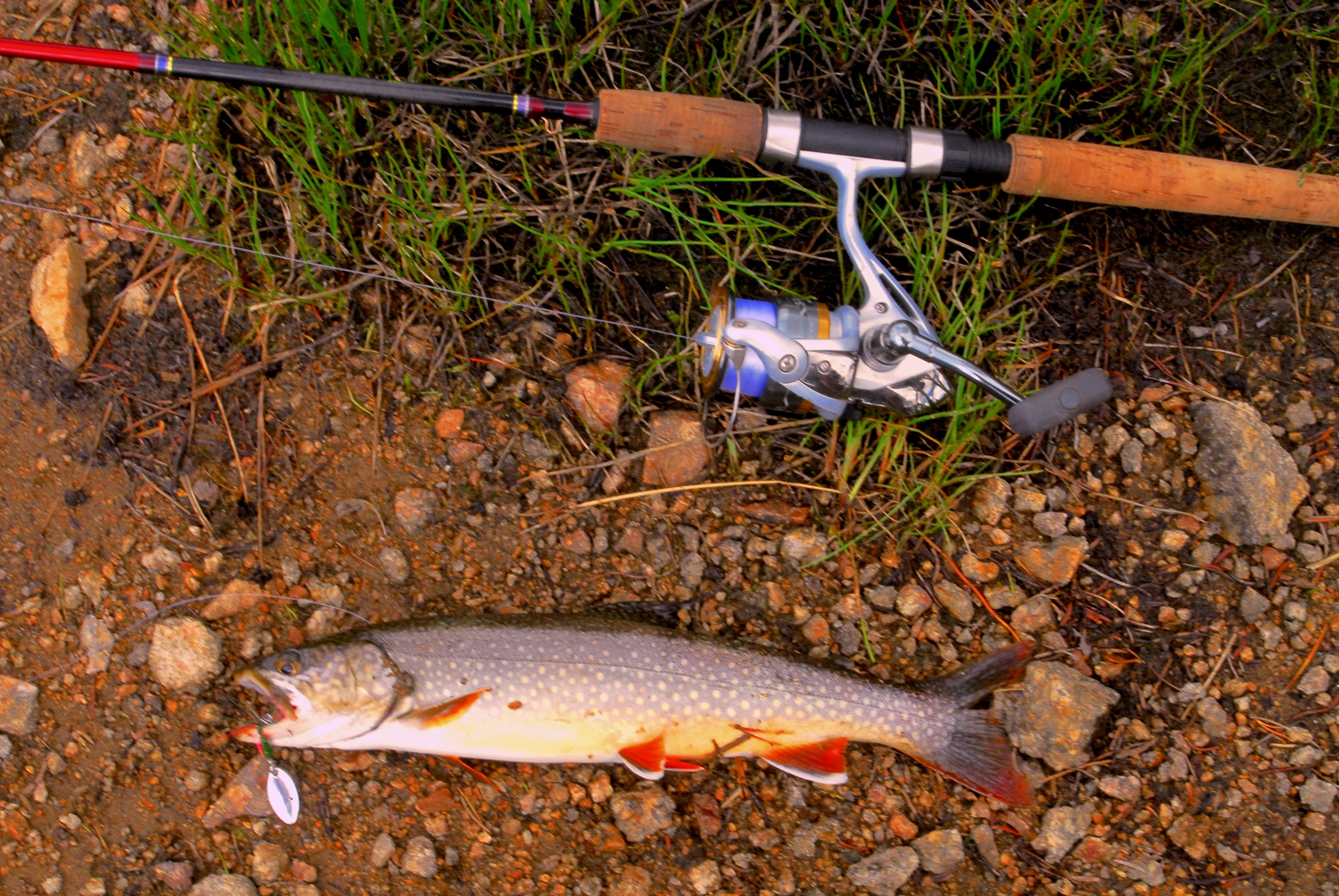 I think one of the reasons the trout were biting so readily  was because a major storm was rolling in. This ended up being a double-edged sword. I was so enamored with the fishing, I didn’t monitor the weather properly–that is, I didn’t notice it until a huge boom of thunder  echoed in the distance. It suddenly became real to me that the horizon was littered with ominous black clouds, and we were still a good four miles from the car. Yossi and I booked it like Forrest Gump outta there.

About a mile from the trailhead, we came upon the same wildflower meadow that we crossed on the first day. The clouds were seriously rolling in. 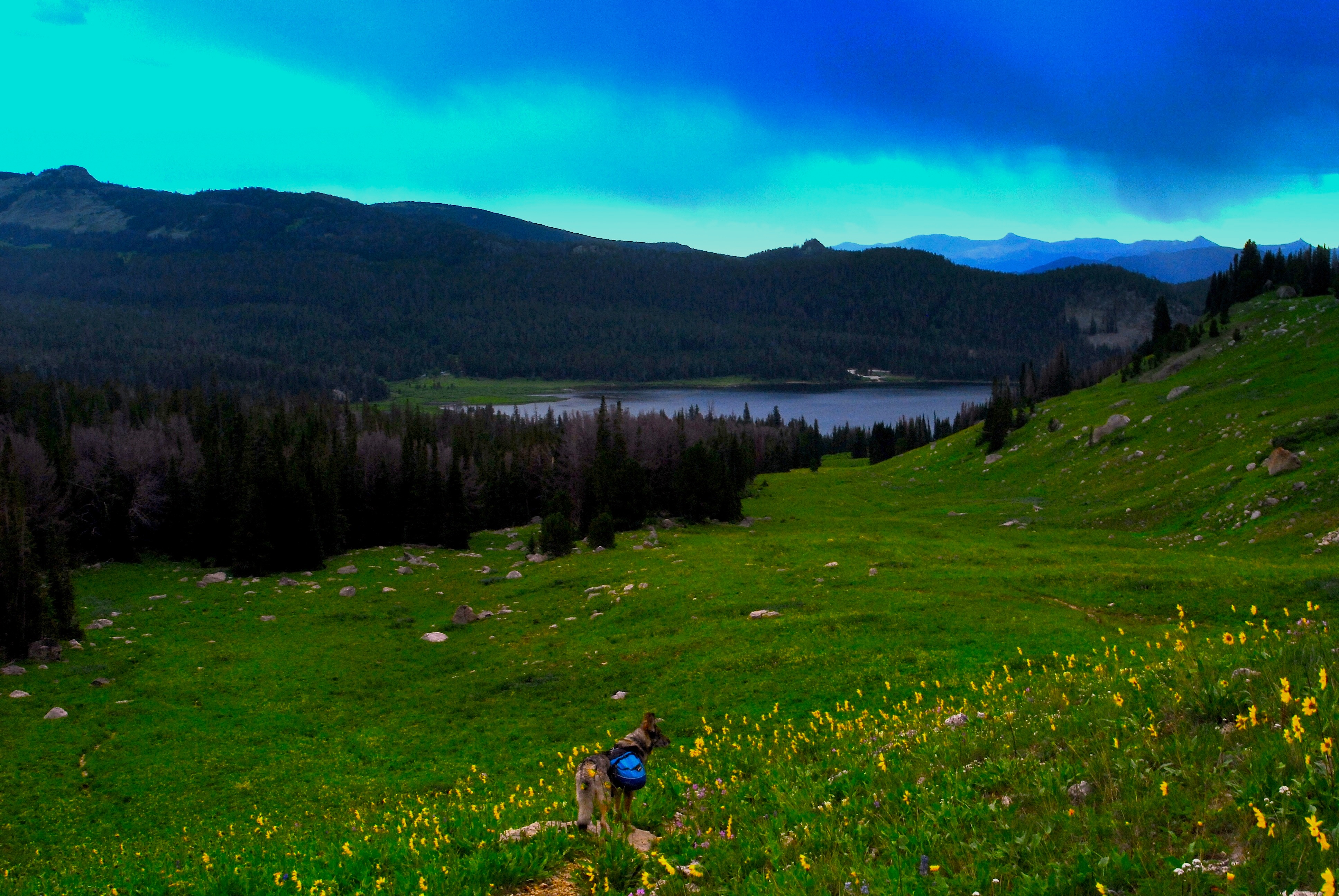 Remarkably, we made it back to the car just as the rain came down. I sat in the trailhead parking lot and watched the furious storm erupt over Beartooth Lake. It was a nasty one and I’m definitely glad Yossi and I weren’t on the trail as it passed through.

One thought on “Update from Montana”