Before heading to Wyoming, I spent one last day in South Dakota. Naturally, I visited Mount Rushmore.

Mount Rushmore is surrounded by beautiful, towering mountains. After passing through the Monument gates, I followed a meandering road until George Washington’s smiling face appeared in the distance. 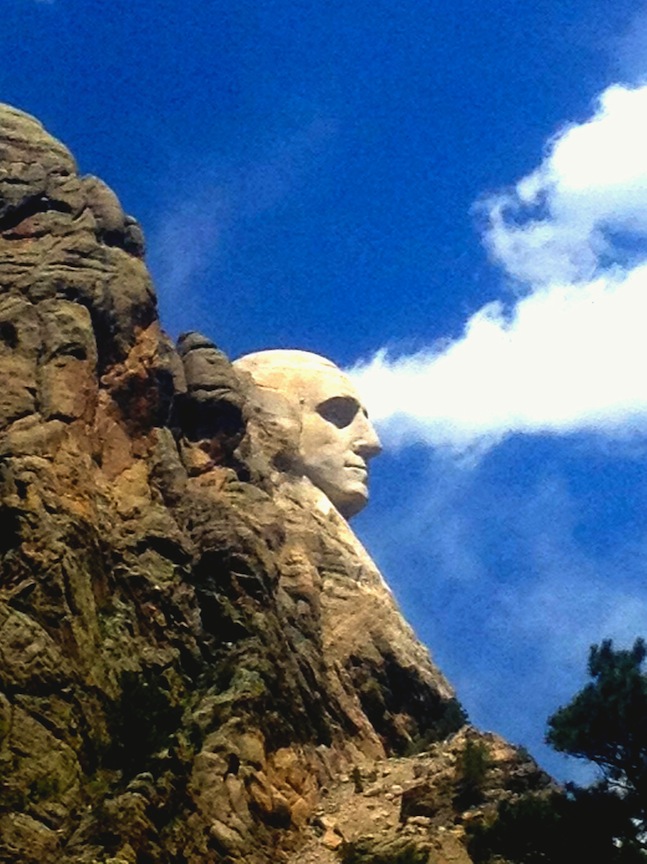 Mount Rushmore is an extraordinary feat of engineering and an honorable tribute to four great men. That said, I did not find it that impressive. There are some things that can only be experienced in person, and then there are things where a textbook photo will suffice. Mount Rushmore is the latter.

I will admit, however, that I completely cheapstaked the Rushmore experience. Rather than pay the pricey entrance and parking fees, followed by waiting in stop-and-go traffic, I found an unmarked road in my atlas that passed right by the carved mountain. My frugality paid off and I came upon a quiet viewing area–away from the crowds. 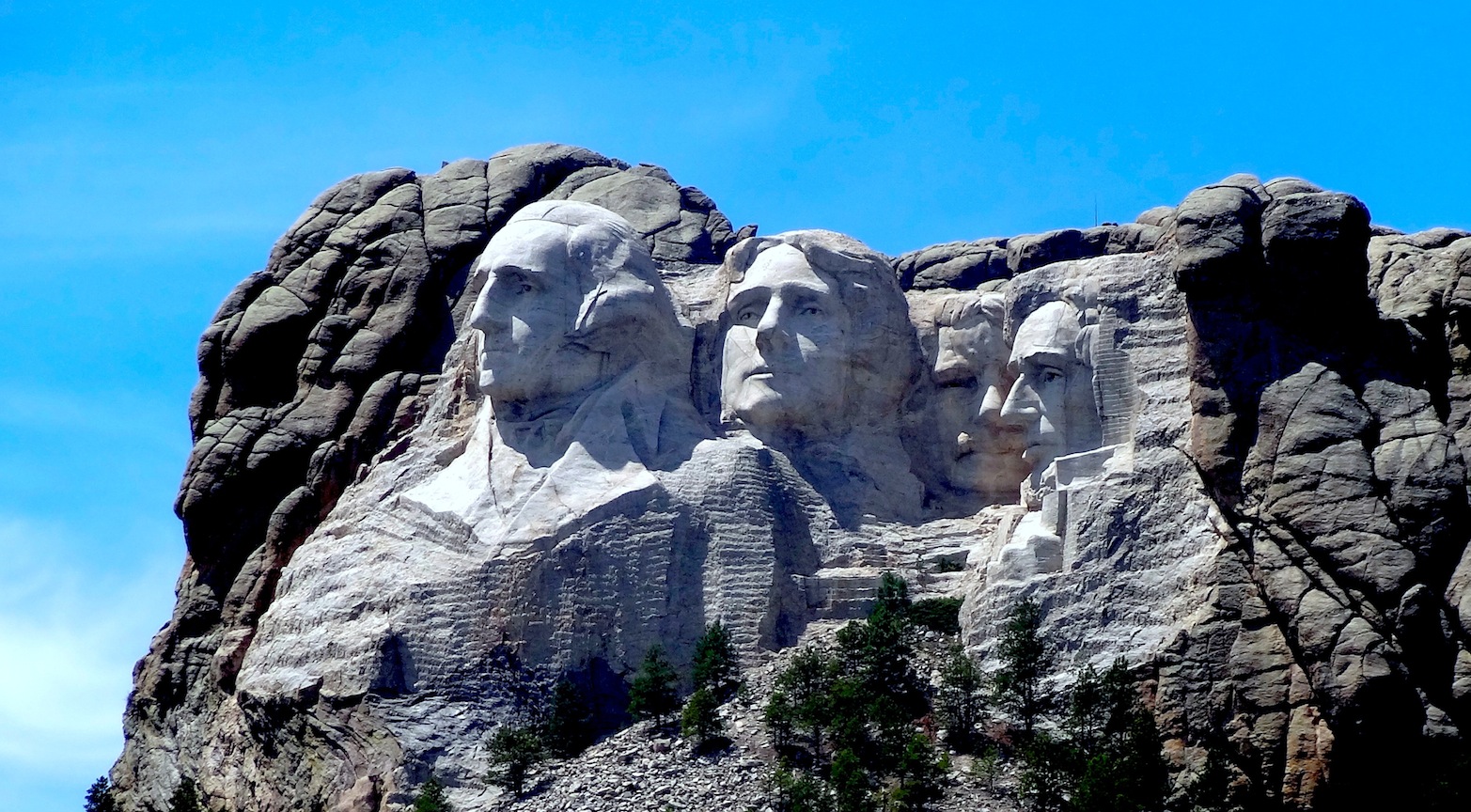 My view of Mount Rushmore. Roosevelt seemed a bit cramped from the road.

All in all, there is nothing wrong with Mount Rushmore. I suppose I just expected more. Considering the lengths vacationers take every year to reach it, mixed with the lore Mount Rushmore holds in the American tapestry, I think this destination is a bit of a letdown. Badlands National Park, Custer State Park, and Black Hills National Forest were far more spectacular in my book.

While I’m kicking a national monument while it’s down, Mount Rushmore was also an example of some of the difficulties that arise when traveling with a dog. Many parks and attractions, especially National Parks and Monuments, have harsh restrictions against pets. Dogs must be kept on a leash at all times and are strictly limited to a few, sparse areas (basically the main roads and public campgrounds–no hiking trails or backcountry areas). At Mount Rushmore, had I not discovered the alternative route, I would have been forced to lock Yossi in the car (in direct sunlight) and walk to the vantage point alone.

With Mount Rushmore checked off (or shrugged off), I drove west to a town called Buffalo, Wyoming in order to meet up with two college friends, Nathan and Caleb.

Nathan works as a field archaeologist for the Bureau of Land Management in Buffalo. During the day, Nathan scours the Wyoming countyside for artifacts and historical sites. He served as the perfect tour guide for wilderness areas as well as local town festivities.

Buffalo is a fun western town with plenty of character. On our first night in town, we headed to a historic inn/bar called The Occidental Hotel. The Occidental was once a major resting spot for the rich and famous as they toured through the West. Photos of famous guests such as Theodore Roosevelt, Ernest Hemingway, and Butch Cassidy still adorn the walls.

On Thursday nights like the one we attended, the bar acts as the cozy venue for a local bluegrass jam. It was a great scene: the historical hotel with its ornate interior, the locals dancing to the music, and the band laughing along to give the whole place a convivial, carefree feel. We drank local beer, shot a few games of pool, and enjoyed the music. Nathan brought his banjo along, and later jammed out with the performing act.

The next day we packed our bags into Caleb’s truck, drove out to the country, and hiked into an incredible area called Bighorn National Forest. 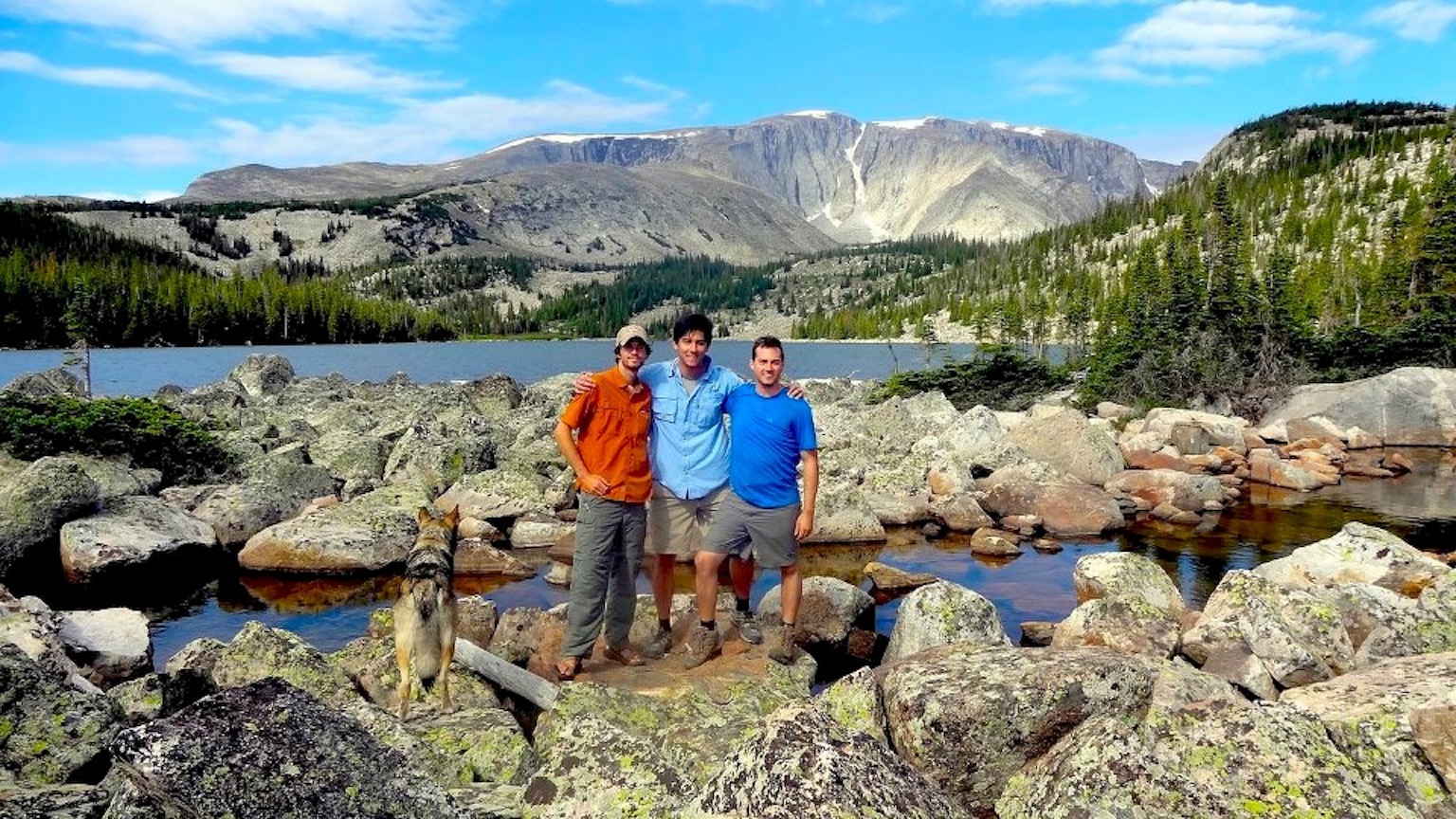 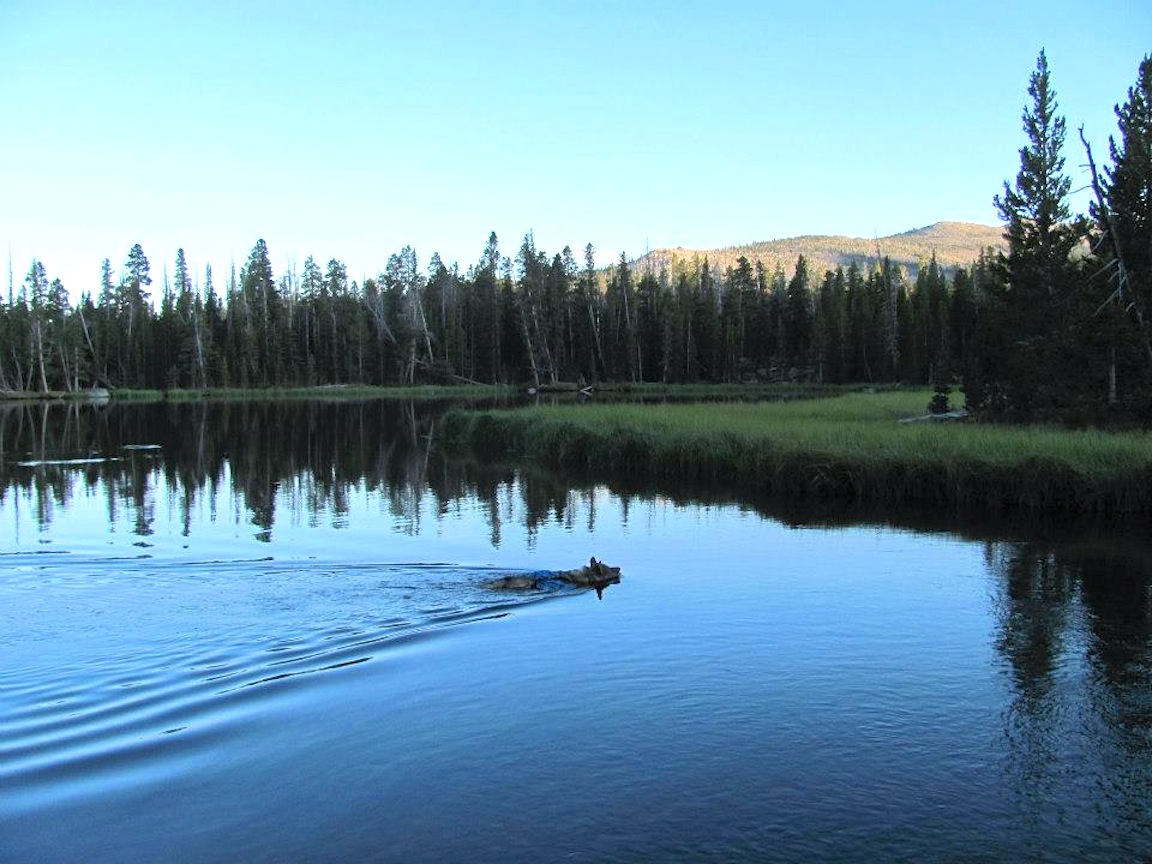 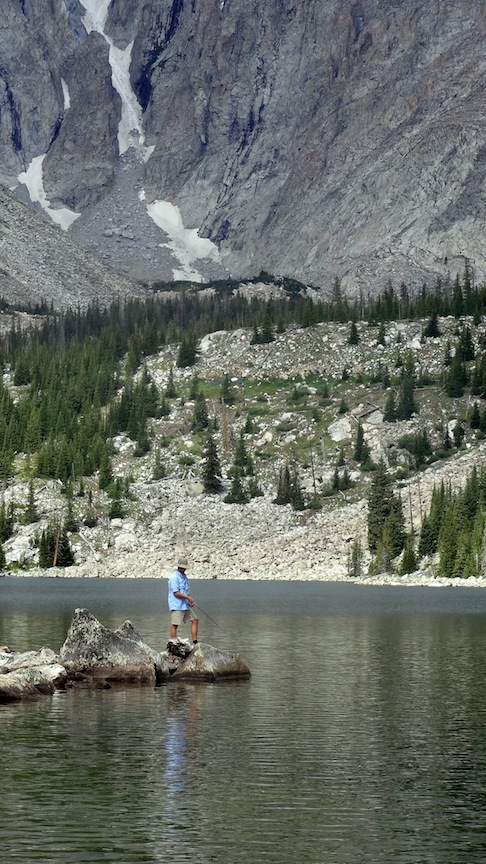 We camped out for a few nights and spent the days fishing along the pristine water. The lakes are feed by mountain snow and glacial melting. The water is crystal clear, frigidly cold, and teeming with trout. 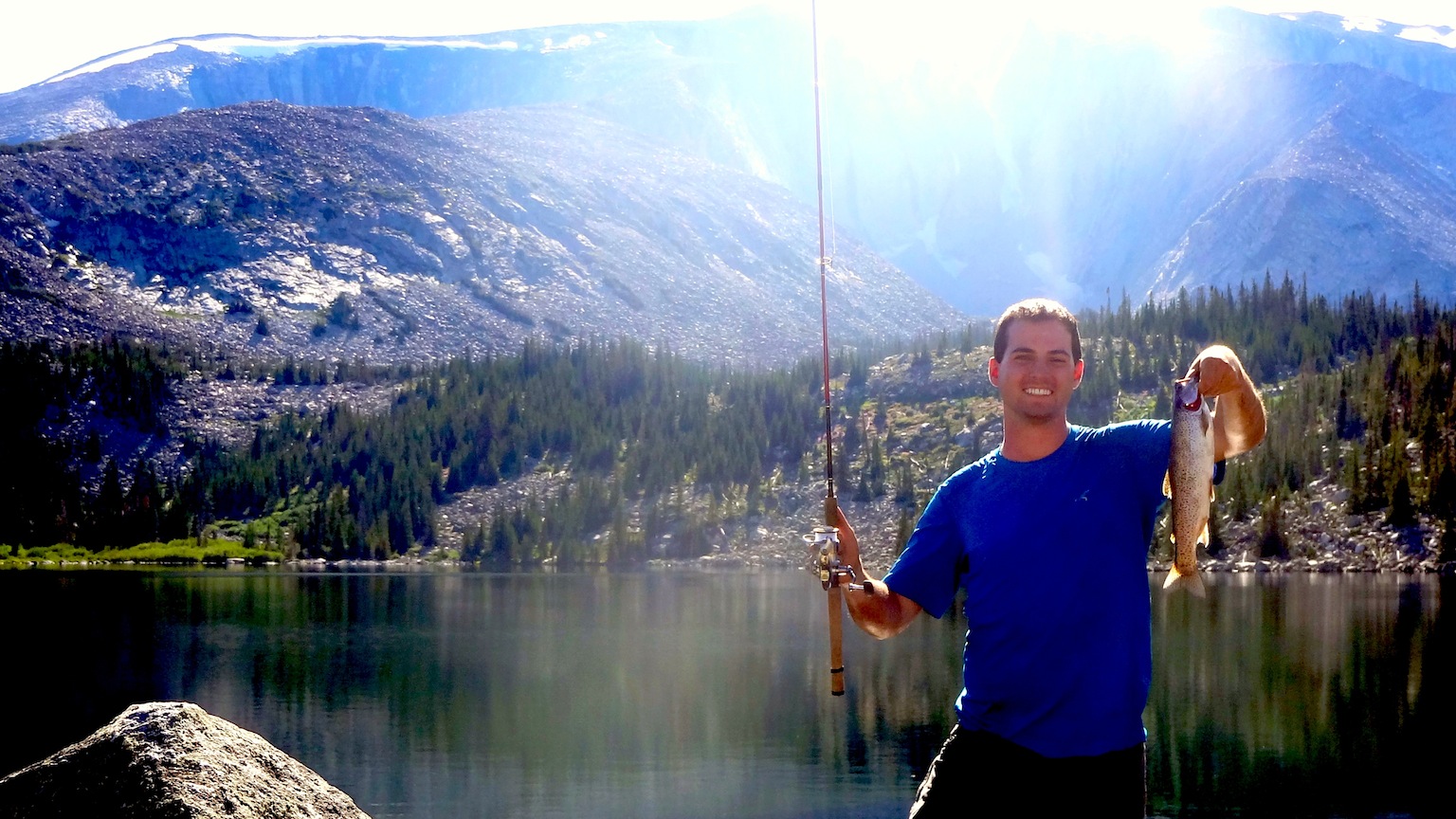 The trout fought very well and made for fresh dinner. I filleted one of mine and cooked it in a cajun rice mix. Since we lacked oil or butter, I fried the fillets in some canned pineapple that Nathan had in his pack. This worked incredibly well, giving the meal a sweet, tangy flavor. For trail food, I doubt I will ever top that dinner of fresh rainbow trout fillets simmered in pineapple, served over cajun brown rice. 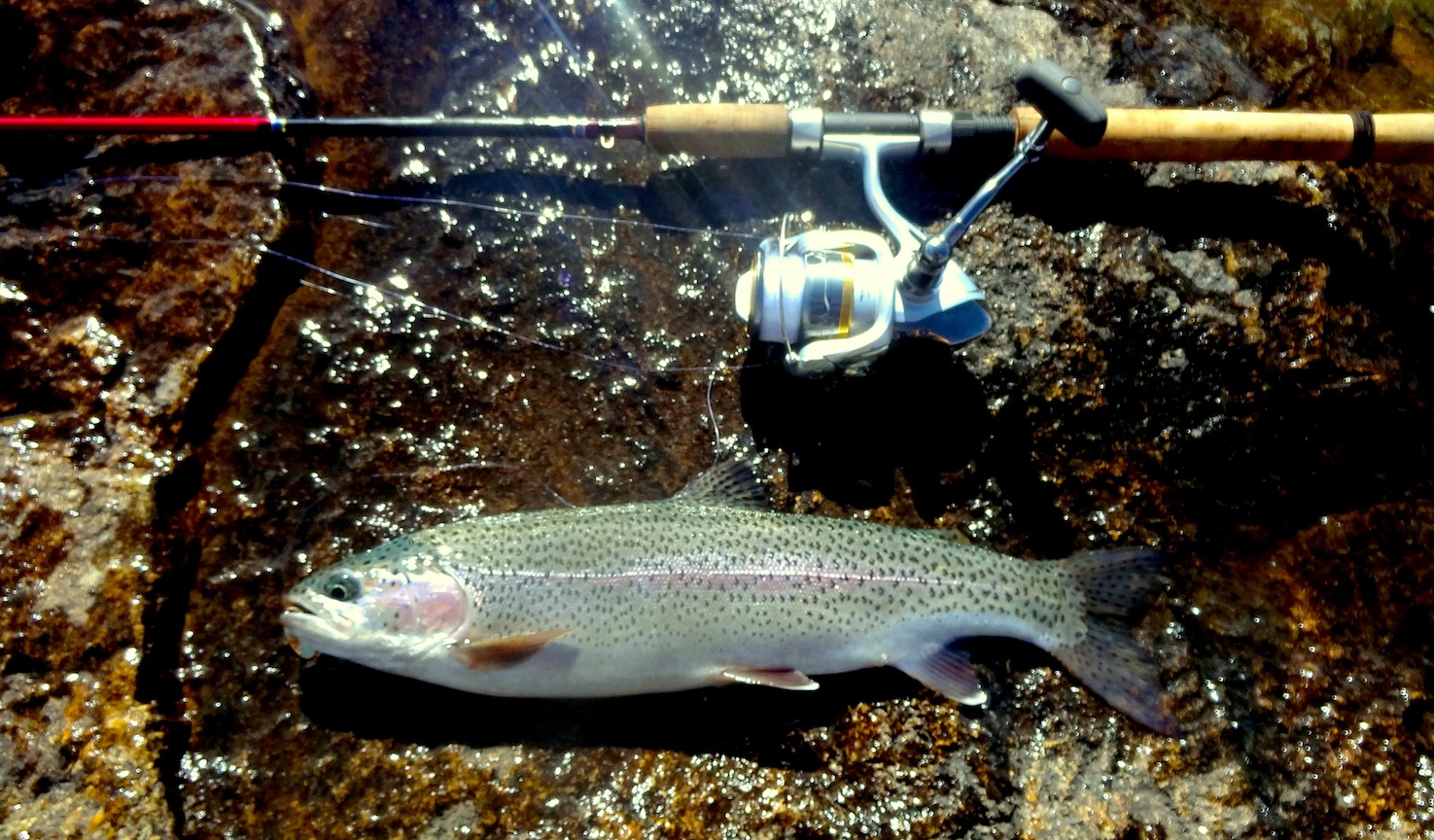 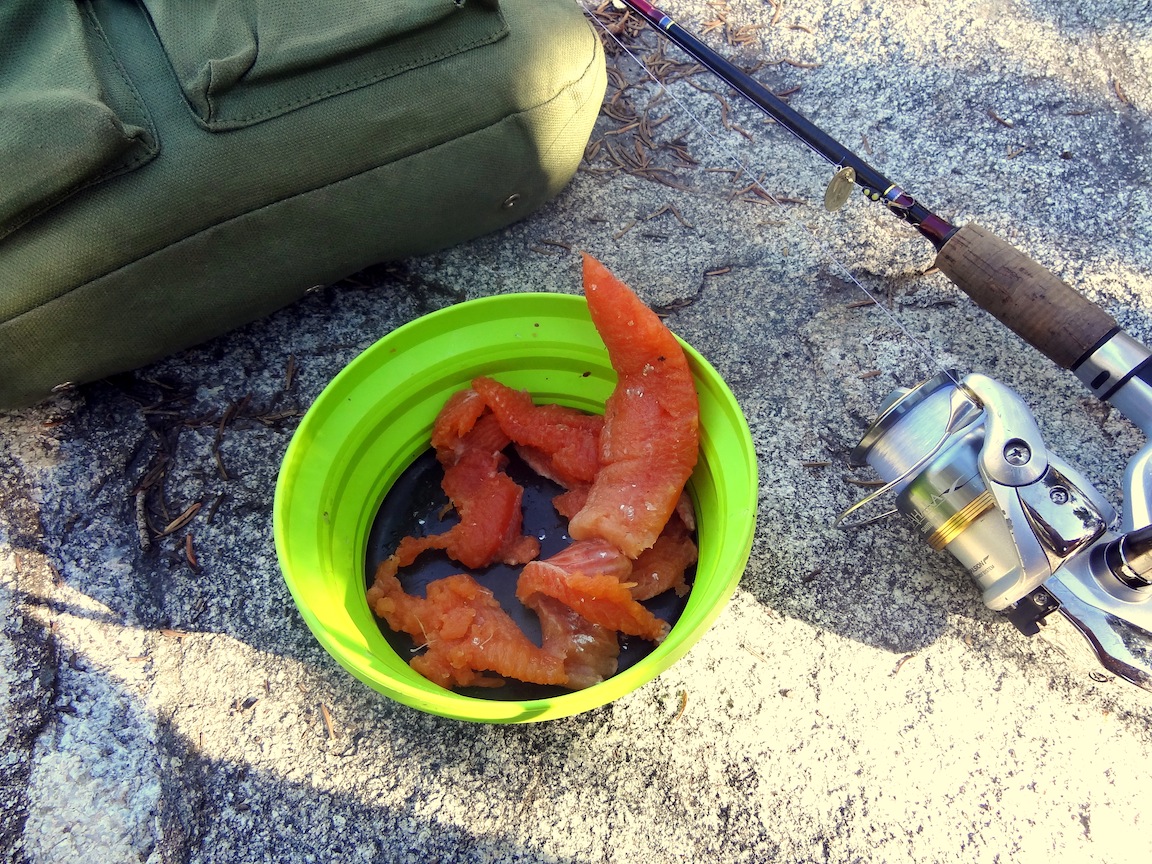 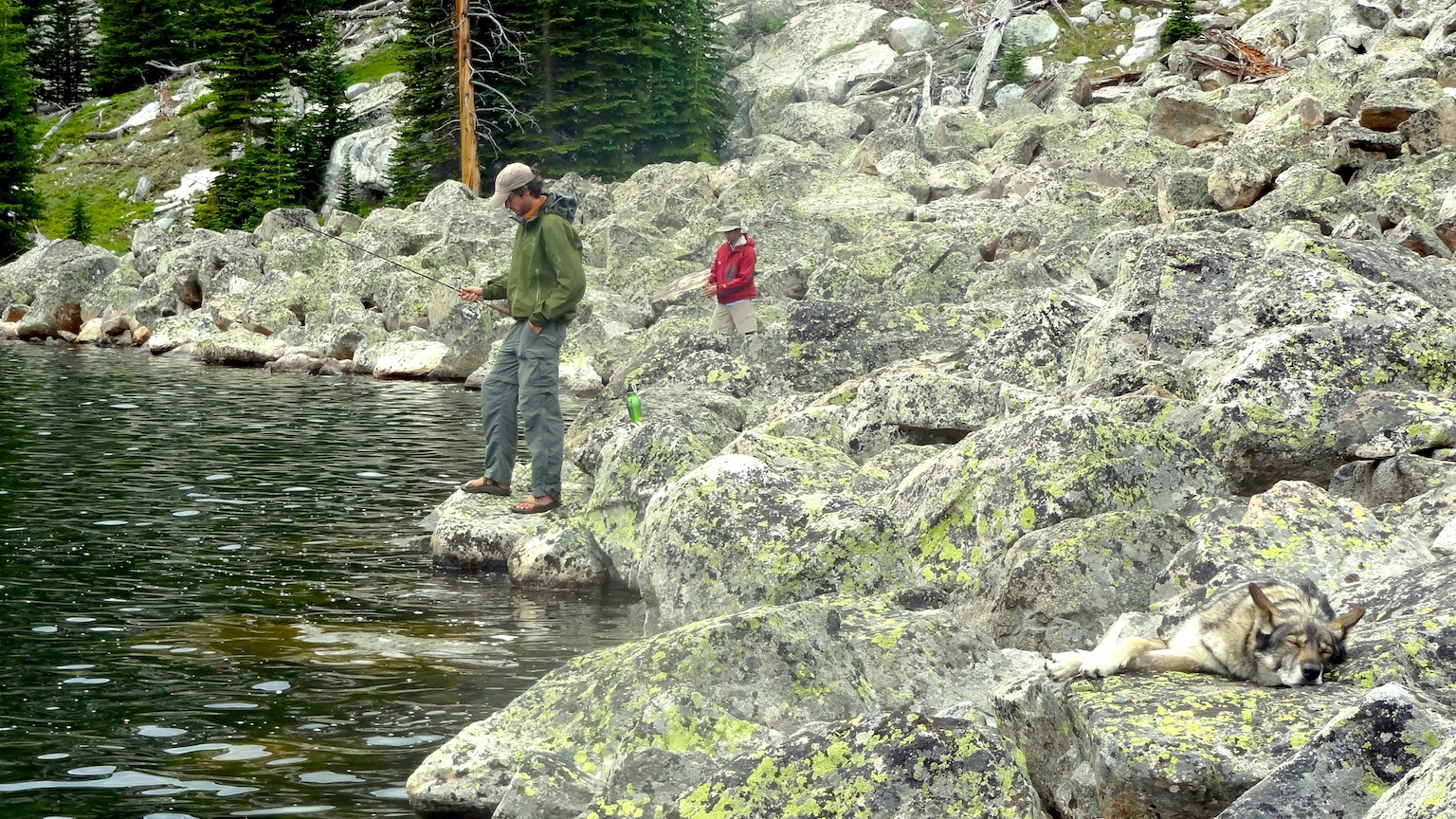 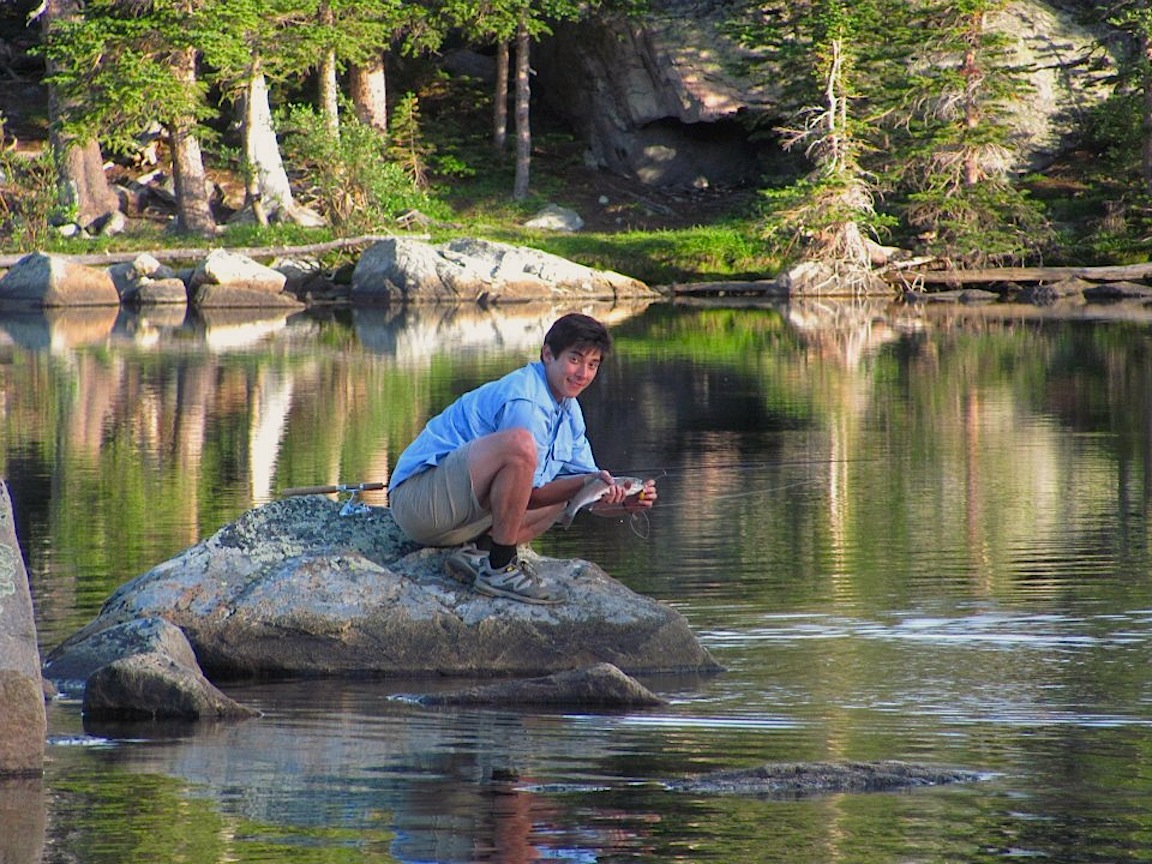 Caleb with a nice rainbow trout later that evening.

Bighorn National Forest is a gem. We had a great time backpacking in and the trout fishing was exceptional. It was a relaxing few days that seemed to end mercilessly soon. I certainly hope to return someday. 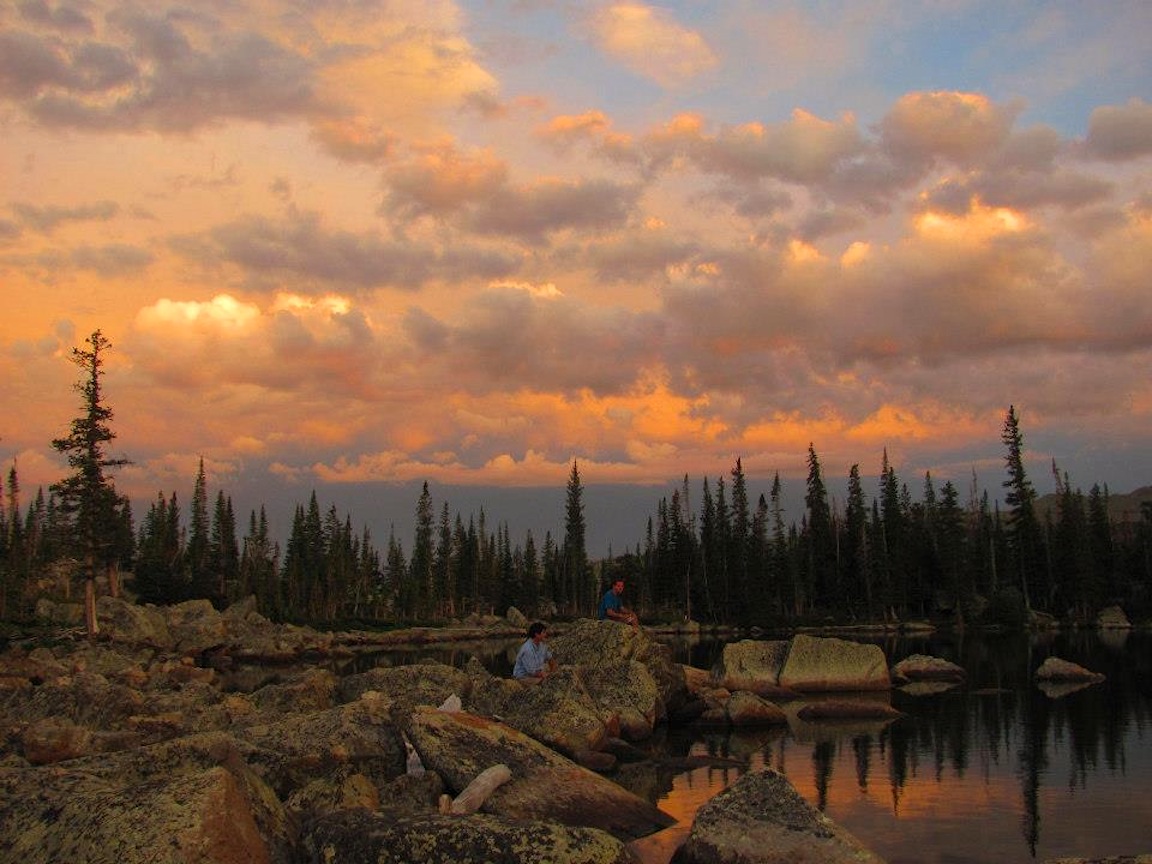 Relaxing at the end of the day, as the sun sets behind the Big Horn Mountains.
Left to right: Caleb Pan, Jesse Barker-Booth
Photo: Nathan Barnes